Photo by UTA Athletics
Despite moving to the bench and averaging five points per game, the junior is vital for the Mavs.

Through 12 games, UT Arlington sits at 8-4, with a 6-2 record in Sun Belt play. Despite losing its head coach just before the season and bringing in first-time head coach Shereka Wright, this team is right in the hunt to win the Sun Belt.

This comes in spite of the fact that this team looks a lot different than last year. Of the five players averaging 20-plus minutes per game, just two played minutes for this team during the 2019-20 season.

One of those two players is Katie Ferrell. The junior has never really been a scoring threat over her time in Arlington, but the former state champion at Plano has done virtually everything else over her career. Her play has been key for this team, even with reduced minutes and the loss of her starting spot.

What Katie Ferrell brings to UTA

While Ferrell is averaging just five points per game on the season, she ranks highly in some other categories. Per CBB Analytics, here are her percentile ranks in some box score stats:

So while she isn't going to be the first or second or third option offensively when she's on the floor, she has been contributing a ton to this team's success in other ways. She's a smart passer. She crashes the boards. She defends well. And she's also managed to knock down some open looks when she's gotten the opportunity.

The Mavs have a net rating that's 8.2 points higher when Ferrell is on the floor vs. not on the floor, a number that's second on the team to Terryn Milton, another player who admittedly isn't talked about enough. Of this team's most-used lineups, two of the three best by net rating have featured both Ferrell and Milton, though COVID issues have meant that no lineup from UTA has played more than 31 minutes together, so keep that small sample in mind.

Anyway, let's break down Ferrell's impact with some film, starting in an unlikely place: her scoring!

One of the ways that Ferrell gets involved offensively is by hitting threes.

Ferrell brings the ball up the floor on this one, then passes it off once she gets around the 3-point arc. The ball comes back her way a few seconds later, but there isn't really a play there, so she just passes the ball back to the other wing. But when the ball winds up in the opposite corner, the defense backs off of Ferrell, leaving her open to get the ball lobbed back her way. The defender comes back over, but Ferrell's unphased by that, takes a second, and lifts up for the three.

Despite her reputation for being a non-entity in terms of scoring, it should be noted that Ferrell's points per possession on catch-and-shoot possessions ranks in the 65th percentile, which is pretty good! (Synergy officially calls it "very good.")

Her dribble jumper has been a problem — just five points in 13 possessions — but if she can focus on doing the thing she's best at offensively, UTA will reap the rewards.

Maybe the most interesting finding from her Synergy page is her numbers when you factor in possessions plus assists. Overall, Ferrell's 90 possessions have resulted in a 33rd percentile rank in points per possession. But her numbers when assists are factored in were much, much more impressive:

Speaking of assists, let's break down a couple of them:

After the turnover, Ferrell pushes the fastbreak ahead and makes a nice deep pass to get the ball into the halfcourt. The defense is able to slow things down here, forcing UTA to run a play. Ferrell hangs out back at the top of the arc and gets the pass. You can see her kind of size things up here and think about the shot, but she also notices that the defense has just completely forgotten about the existence of Bre Wickware. Wickware calls for the ball and Ferrell anticipates her cut to the basket nicely, delivering the pass, which leads to a pretty easy look at the bucket for Wickware.

That first play saw Ferrell initiating things, but here we see her passing skills coming with her largely off the ball for the first half of this possession.

Eventually, though, the ball makes it her way, which is where things start to get really fun to watch. She passes into Misty Dossey at the top of the key, who then tosses it back to Ferrell, who now has a lot of momentum as she moves towards the basket. Ferrell drives into the paint, forcing the defense off of Dossey, who takes a step back behind the arc. Suddenly, Ferrell — who has basically drug the entire defense down into the paint — flips the ball back to Dossey, who drains the open three. This little two-player give and give and give play works to perfection.

Rebounding is another area where Ferrell helps out the team. She was a 17.6 defensive rebounding percentage, the second-highest mark on the team behind Emma Halverson. Ferrell's ability to run the floor means that if she can get into the paint and track down the rebound, she can help immediately start the break going the other direction.

And speaking of things on the defensive end, Ferrell's advanced defensive metrics are just incredible. I almost don't know how to describe this. Per CBB Analytics: 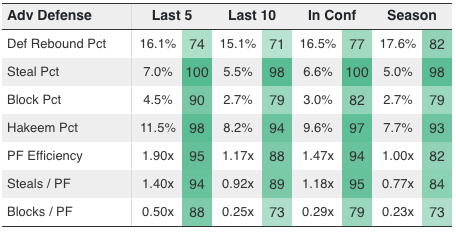 I think this is really where Ferrell's impact is felt. Sure, she's a gifted passer who helps make things run offensively, but on the other end of the floor, she can disrupt anything, forcing opposing teams to get out of rhythm. She's a great shot blocker, especially when you factor in that she's not a big, and she just has some otherworldly awareness on that end. Take this play, for instance:

Let's just trace Ferrell's movements here from the beginning of the play on.

First, when the opposing team grabs the rebound, Ferrell picks up the ball-handler in the open floor as she takes the ball down in transition. Ferrell shadows the ball-handler, forcing her out of rhythm and leading to her getting the ball out of her hands.

From there, Ferrell runs out to the corner to close out on the potential catch-and-shoot look. Her hard close here forces the player to put the ball on the floor and then pass it off.

Eventually, a totally different player cuts in from the perimeter to try for the easy bucket. But the pass is a little off, and Ferrell just kind of appears there to grab the loose ball for the steal.

If you're keeping track, Ferrell ends up impacting this single play three times, and that leads to her eventually coming away with the ball.

UTA is right in the thick of the battle for the Sun Belt. And while players like Wickware, Shyia Smith, and Jordynn Hernandez have been big parts of that, Ferrell has always been there to do all the little things. Teams need scoring, but they also need players who can bring all the other basketball skills to the table. That's Ferrell.