The Islanders are way better than most expected, and could be SLC contenders.

Technically, Texas A&M Corpus has yet to play a conference game, as some schedule quirks brought on by COVID have led to the team scheduling a few extra games against fellow Southland teams UIW and HBU. But the Islanders have won their three games against those Southland foes, with an actual Southland game against UIW on tap for Saturday to officially launch the conference season for TAMUCC.

So far, the Islanders sit 8-6 this season. Last year, this team finished 6-13 overall and 4-7 in conference play. After winning the conference in the 2019-20 season with a senior-laden team, the Islanders were expected to be rebuilding for at least a couple of seasons. But the departure of the Texas Four schools to the WAC and the shaky ground left behind in the Southland means that the Islanders could be ready to shock everyone and win the conference again.

In his preseason preview for Dave Campbell's Texas Basketball, Richard Dean picked the Islanders to finish sixth out of the eight teams in the Southland, with Houston Baptist and Incarnate Word both finished ahead of the team. Royce Chadwick's team seemed to be a year or so away from really contending.

But, maybe things have changed? Let's take stock of how this team is improving and then survey the conference as a whole.

What are the Islanders doing well?

Alright, we'll talk about more than just Westbrook, but any discussion of what this team is doing has to start with the team's best player.

Let's dive into some stats from CBB Analytics and see just how good Westbrook has been.

Here are just some various charts of her numbers this year. The number that is in either green or red represents her percentile rank among Division I players and, umm, yeah: 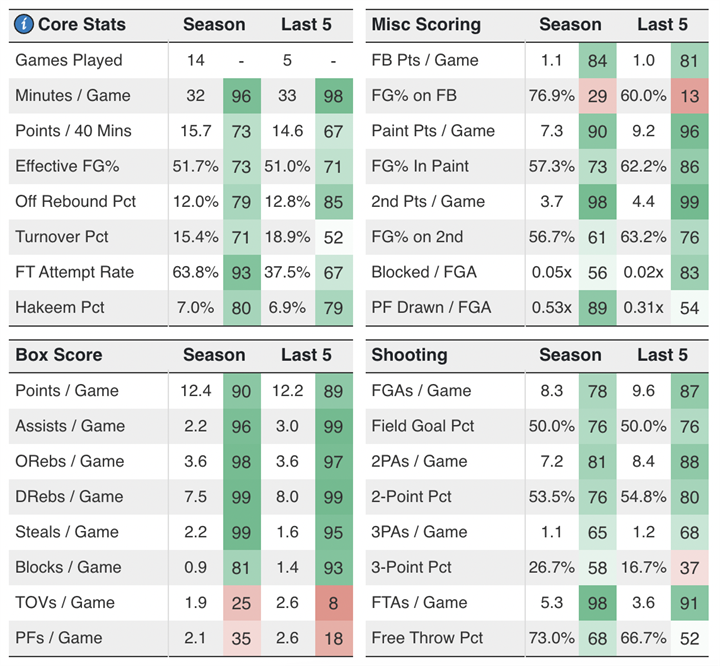 That, my friends, is a lot of green.

Westbrook is shooting 64.8 percent at the rim, which is 5.3 percent above average. She's also smartly taking a ton of her shots there in the restricted area, with 61.2 percent of her field goal attempts coming within four feet of the basket. The Division I average is 23.9 percent. The Islanders have a plan offensively, which is to work the ball inside to Westbrook and just let her do her thing.

You'll need to fast forward (or watch, your call!) the highlights of SLU men's player Keon Clergeot in the above tweet in order to get to Westbrook's highlights, but once you do, you'll see some good stuff, like her setting up just outside the paint to allow room for a teammate to drive, but then also using her size to cut to the basket as that player drives, catch the pass, and deliver hard at the rim.

There's also a really fun play where Westbrook is initially the ball-handler out on the perimeter. She throws the cross-court pass and then sets up in the key. The other player drives, then kicks it to Westbrook at the free throw line. She takes advantage of having a much smaller player matched up on her and takes off, getting past the defender and then putting up a floater in the middle of the paint.

And on the other end, Westbrook is playing aggressively. 2.2 steals per game, which ranks in the 99th percentile, and 0.9 blocks per game, which is in the 81st percentile. She might foul a little more than you'd like, but she's also drawing fouls, with a 93rd percentile free throw attempt rate.

But Westbrook isn't the only reason this team is playing so well.

As a whole, this team is in the 99th percentile in field goal attempts per game at the rim. Everyone — not just Westbrook — is playing with a "get the ball inside" mentality.

Well, everyone except for Violeta Verano, who is taking 3.4 threes per game, and Annukka Willstedt, who is taking 2.7. Verano is only shooting 29.2 percent this year from deep, but has improved lately. After starting the season 2-for-22 from deep, she's now 12-for-26 since. The Spanish player — who spent two seasons at Bradley — has started rounding into form lately, creating an added dimension on this offense and is also adding 4.5 assists and 1.4 steals per game. And Willstedt, a Freshman who is from Spain but played internationally for Finland's U16 team, has had some really good moments, though she hasn't played since December 17th against Schreiner.

A few other highlights:

- Nabaweeyah McGill is shooting 51.8 percent from the floor

- The team has a plus-13.6 net rating when Westbrook and Verano share the floor

Can the Islanders win the Southland?

Can this current production last? Maybe. The team is playing really well and could slip just because that's how sports works. But a quick look around the rest of the conference shows that the Islanders stack up really well so far.

The team is last in the conference in 3-point attempt rate, but a strong inside game can make up for the absence of an outside game. Baylor for the last two decades (before this year) is a good example of how that can work.

The Islanders are the only Southland team shooting over 40 percent as a team. The team is also taking 23.2 free throws per game, the most by far in the conference. The team's style of play leads to that.

The team also has consistency going for it. Out of all the lineups that the whole conference has had, the Islanders have the two most-used lineups, the only five-player lineups in the conference that's played 50-plus minutes together.

If the team can stay healthy and keep putting Westbrook/Verano lineups on the floor, then the Islanders have a shot to surprise everyone and win the Southland. I'd still personally have SLU as the favorite heading into conference play, but the Islanders are right there behind them.